Disclosure: My family was invited to Disney for a weekend to experience some of the new attractions at Disney’s Hollywood Studios, Disney’s Animal Kingdom, and Epcot. You can also read about it at http://www.lifewithlisa.com/awaken-summer-disney. 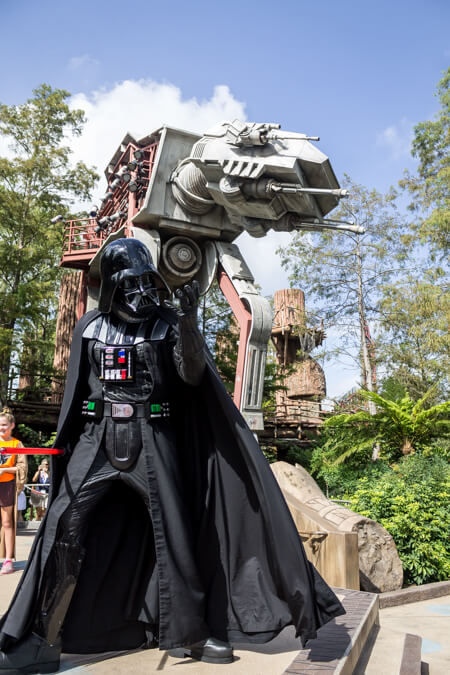 With all the new Star Wars inspired entertainment at Walt Disney World, The Force has never been stronger. This summer is the perfect time to enjoy exciting new and reimagined experiences. Disney’s Hollywood Studios now includes elements from Star Wars: The Force Awakens, the highest grossing film of all time. At Star Wars Launch Bay, you can celebrate all things Star Wars, Star Wars: Path of the Jedi will give you a cinematic overview of the Star Wars saga and cool new enhancements for Star Tours – The Adventure Continues and Jedi Training: Trials of the Temple. Disney’s Hollywood Studios offers lots of new Star Wars inspired food and beverages and even a Star Wars-themed dessert party. The nightly fireworks show called the Symphony in the Stars: A Galactic Spectacular will absolutely blow your mind with projections, music, fire, lasers, and fireworks. With all the new additions you can now celebrate the Star Wars saga at Walt Disney World Resort like never before. This summer is the perfect time to transport yourself to a galaxy far, far away. 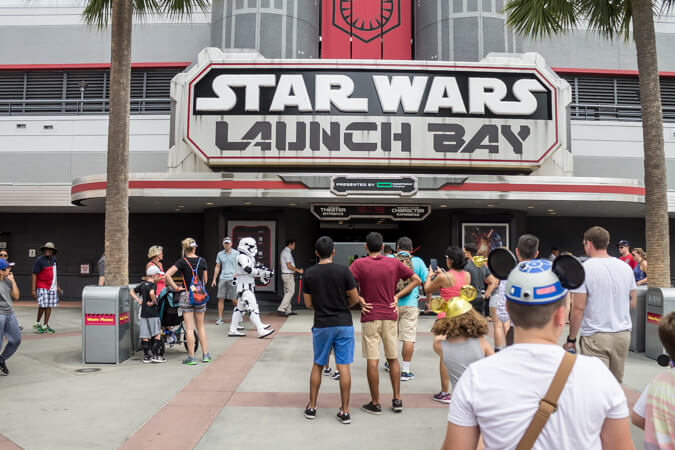 Star Wars Launch Bay is a central locale for guests to enjoy all things Star Wars. The outdoor area is lined with special concept artwork and the inside is loaded with some of the most beloved characters, tour galleries featuring memorabilia and replicas of large scale Star Wars artifacts including ones from Star Wars: The Force Awakens. At Star Wars Launch Bay, you can play the latest Star Wars interactive video games and have access to special Star Wars merchandise. Both inside and out you will find roving patrols of First Order Storm Troopers. Inside you can come face to face with some of your favorite characters and experience Star Wars through your plate. After grabbing a few intergalactic treats at the dessert party, meeting Storm Troopers and taking my picture with Kylo Ren and Chewbacca, I made my way over to the cantina and met a few Jawa. They really like to have their picture taken. My son and I had a great time playing interactive video games and we were both amazed by all the Star Wars artifacts. Star Wars Launch bay is like no place I’ve ever been before.

Afterward, we set up camp outside The Chinese Theater for Symphony in the Stars: A Galactic Spectacular. This event was truly epic and lit up the night sky like nothing I’ve ever seen before. The culmination of lights, projections, lasers, towering blazes of fire, special effects, and fireworks made for an unforgettable experience. Taking us through scenes from each of the seven movies really brought Star Wars to life. There is no better way to fully immerse yourself in Star Wars than this. 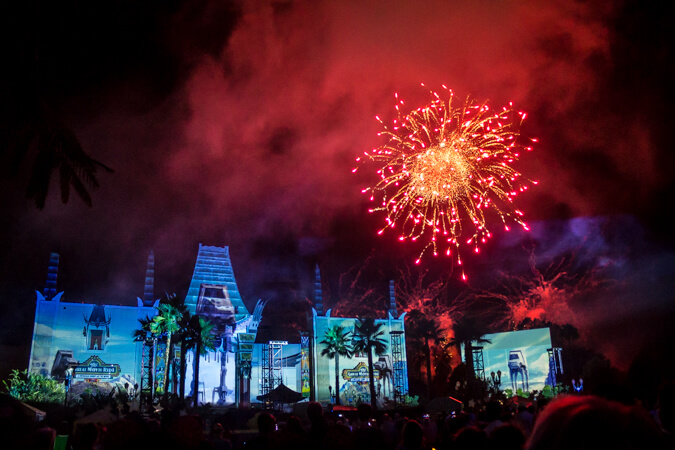 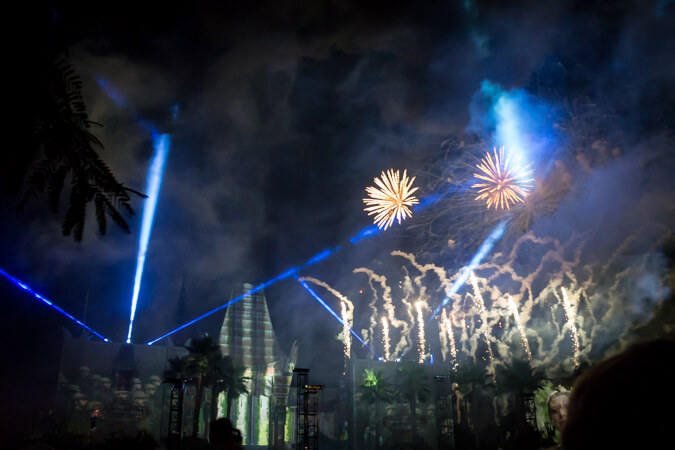 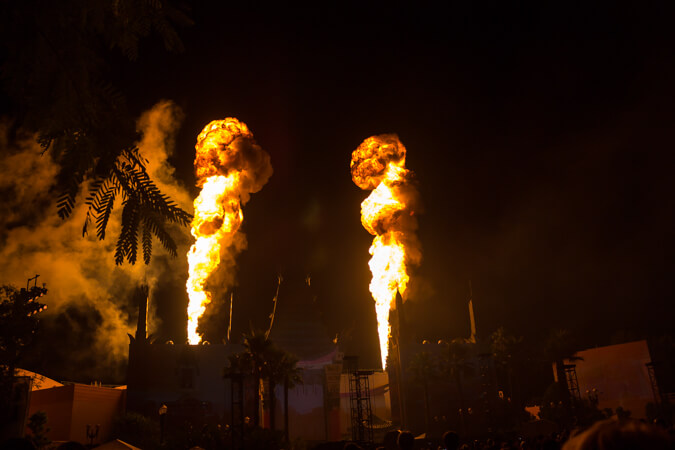 My son had a great time unleashing The Force at Jedi Training: Trials of the Temple. Hundreds of kids lined up to participate in an epic battle against the full powers of The Dark Side. After receiving light saber training, they used the force to summon and vanquish Darth Vader, Kylo Ren, and a new villain, the deadly Jedi hunter from the Disney XD series Star Wars Rebels, the Seventh Sister Inquisitor. Kids who want to participate just need to register before the show and be between 4 and 12 years of age. It is truly a unique and amazing experience.

The new enhancements to Star Tours are simply awesome. The Que is the same the ride is just different and way better. You will still find R2D2 and C-3PO working on the Starspeeder and lots of other fun distractions that make you forget you are standing in line and feel like you are in a Starport. The pre-boarding video is amazing and as soon as you take flight you learn that you’re unwittingly harboring a rebel spy. After an epic escape battle, you land safely and exit through one of the coolest gift shops ever where you can even build your own light saber! 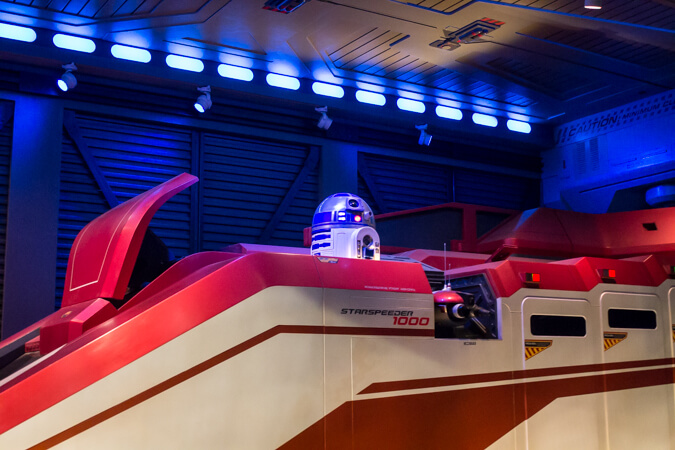 If you like Star Wars you will love the new attractions at Disney’s Hollywood Studios! They really shift your experience into light speed. There’s lots of fun in store this summer that you really don’t want to miss out on. The live stage show Star Wars: A Galaxy Far, Far Away, The March of the First Order Stormtrooper procession led by Captain Phasma, the new elements From Star Wars: The Force Awakens, Star Wars Launch Bay, the character meet and greets, the food, Symphony in the Stars: A Galactic Spectacular will give you and your family a Star Wars experience like never before. Awaken your summer with Star Wars at Disney’s Hollywood Studios!