Ceiling fans are useful throughout the year. They can save you money on your cooling bill by allowing you to set your temperature a few degrees higher. They can also make you feel cooler in the winter when your spouse cranks the furnace up to 8000 degrees and you feel like you’re being burned alive. Ceiling fans are useful for all sorts of reasons. Here is what to look for when its time to buy a new one.

When it comes to ceiling fans, functionality is key. If you buy a fan that’s too small for a room, it won’t move enough air to satisfy anyone’s needs and it will make you look like an idiot. Buy a ceiling fan that’s too big and you’ll overpower everyone with gale force winds, end up making a huge mess, and look like a gigantic moron. 52-inch fans work well in most living rooms and 44-inch fans work great in bedrooms. Check manufacturers details to buy ceiling fans that suit the rooms you’re going to hang them in. If you’re straddling the line between two sizes go with the larger one but run it slower to avoid creating a swirling vortex of household items.

Only buy ENERGY STAR® rated ceiling fans. They work more efficiently and cost less to operate than other ceiling fans.

Another feature to consider is the pitch of the fan blades. Higher pitch fan blades move more air. Check the cubic feet per minute (CFM) measurement before you buy. It will tell you how much air the ceiling fan is capable of circulating every sixty seconds. Sometimes you may like the looks of a fan but not the pitch of the blades. Airflow can be tweaked by simply changing the blades. Just make sure you’re buying premium blades and not some cheap garbage that will sling off the fan and kill you while you’re enjoying a movie or whatever. 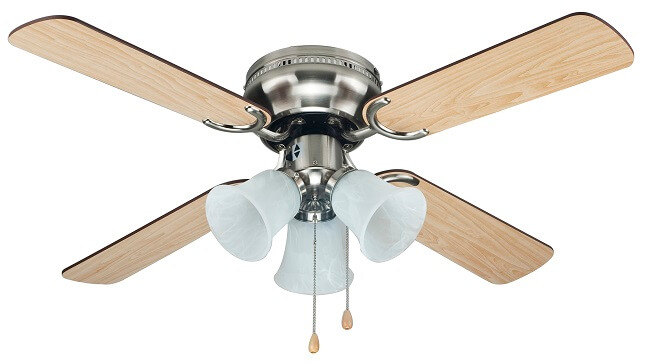 There are many ceiling fans on the market. They come in a wide variety of styles. Not only is it important to buy one that works great and fits your room, you should also buy a ceiling fan that looks good. Don’t be afraid to express yourself artistically if that’s your thing. Fans with curved blades, soft edges, and warm tones are pleasing to the eye. So too are the sleek metallic industrial looking models. It’s all just a matter of preference.

You can also buy light kits to brighten up the room in a variety of ways. We use Phillips Hue Smart Lighting because the brightness and color of the lights are fully customizable via a smartphone app. Control is also voice compatible via Amazon Echo. They look great, don’t cost much, and last a long time. We’ve been using the same bulbs going on four years now. You can find them in-store at Best Buy or purchase online.